nothin' on my mind but Georgia.

GET YOUR ATLANTA PEACHES GEAR HERE!
What came to fruition may just be my favorite design concept I have ever made.  Why?  Because I think that I have captured something in this concept that is the baseball franchise representative of all of Georgia, (not that the Braves aren't) not just Atlanta and the Braves branding as we know it because the original Braves branding we have now is primarily from Milwaukee and Boston before that.  Anyways, without further ado,
I present the Atlanta Peaches Baseball Club concept.

ATLANTA PEACHES​, Part I. - The Colors.

My other in-laws are from North Metro Atlanta, and though it may not be the same as down in Lake Country, but if you've been to Atlanta and North Georgia you know this is true.  It's Green.  Everywhere is green.  Despite being a large city with a giant metro area, Atlanta is full of trees.  Makes sense now why it has the nickname "City in the Forest."

As for how I picked the greens to use as colors, it really is the same process as picking the two peach colors.  I needed a dark color to be able to stand in the primary palette as the primary colors for outlines, jersey designs, etc., so the color I'm calling "Stem Green" is a no brainer.  The other two come from the leaf of the peach, and honestly I couldn't decide which one I liked better, which is why you see two "Leaf Green" colors there.  Primarily, the lighter version is used, because my wife said that one looked the best.

Finally, baseball is a game of traditions.  Traditionally, a baseball team will wear Grey on the Road and White at Home.  So, though you don't see it on the palette, grey is one of the Peaches colors, but for that uniform only.  Instead of white, though, I chose to go in a different direction.  Even more traditionally (you could argue) baseball teams sometimes wear Cream uniforms.  This was a no-brainer for me with this team because of, every pun intended, peaches 'n cream.

Like I said, this concept did start as a concept for the Macon Peaches, so without really much explanation needed, the Macon branding of the concept will come first.  A quick Google search gives me the following history of Baseball in Macon from Wikipedia:

The Macon Peaches were a Minor League Baseball Franchise that was based in Macon, Georgia (obviously) from roughly 1892 until 2003.  The Peaches nickname was in and out for these various teams, changing to Highlanders, Dodgers, RedBirds, and Pirates until they moved to Augusta and became the Augusta GreenJackets.  In 1990, baseball came back to Macon as the (drumroll....) Macon Braves, who in 2003, moved to Rome.  Personally, I think they should have kept Peaches all along.

How would that team have looked had they stayed in Macon as the Peaches all those years?  I can only, and did, imagine it for us all. 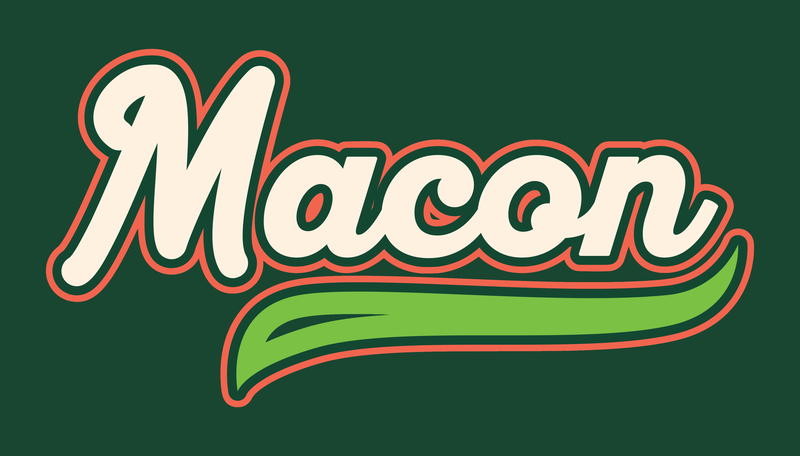 "Macon" Script to appear on the Green Road Alternate Jersey. 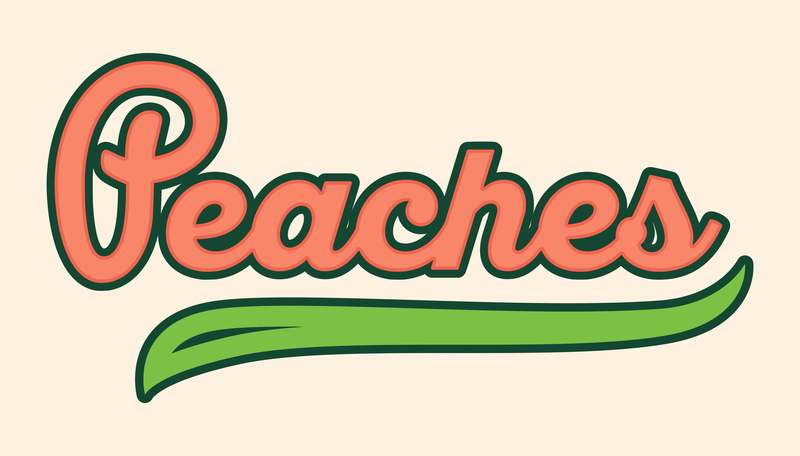 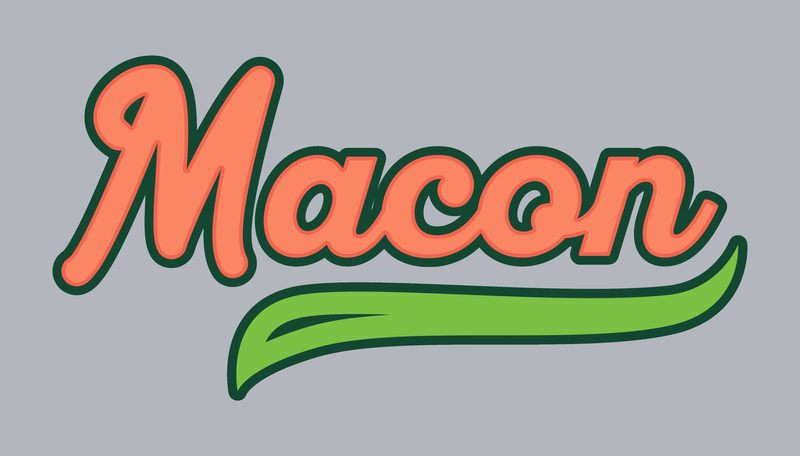 "Macon" Script to appear on the Grey Road Jersey.
Above you see the beginning of my branding concept that everything from this point forward was created from.  The "Peaches" script in the middle came first, as I said earlier it was based on the original Peaches jersey that I found on Google.  The "Macon" script is based on the same concept, obviously, while trying to keep the same script branding that bring the looks together.  The script tail, inspired by the Atlanta Braves Tomahawk, is a peach leaf.

Once the scripts were established, hat logos came next.  These were made simply by taking the capital letter "M" from Macon and creating a primary logo by adding a peach to it.

Primary Macon "M" Cap Logo that appears on the Home and Road hats.

Secondary Macon "M" Logo that appears only on the Alternate Peach hat.
After logos came hats, again heavily inspired by the current design of the Atlanta Braves. 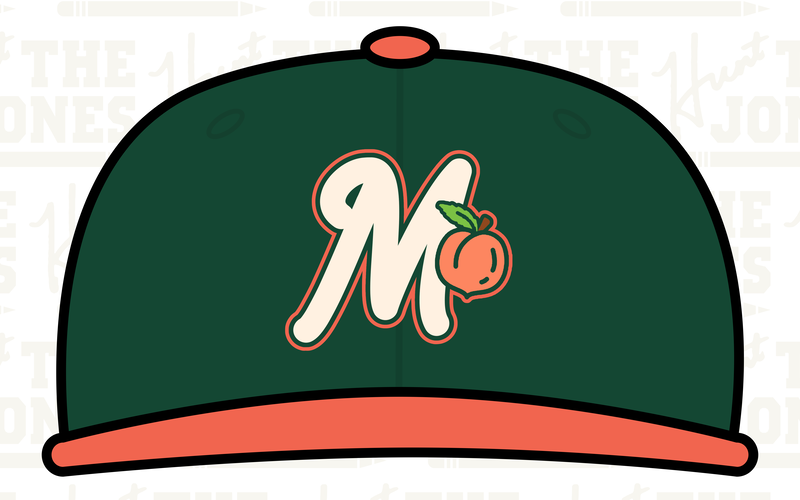 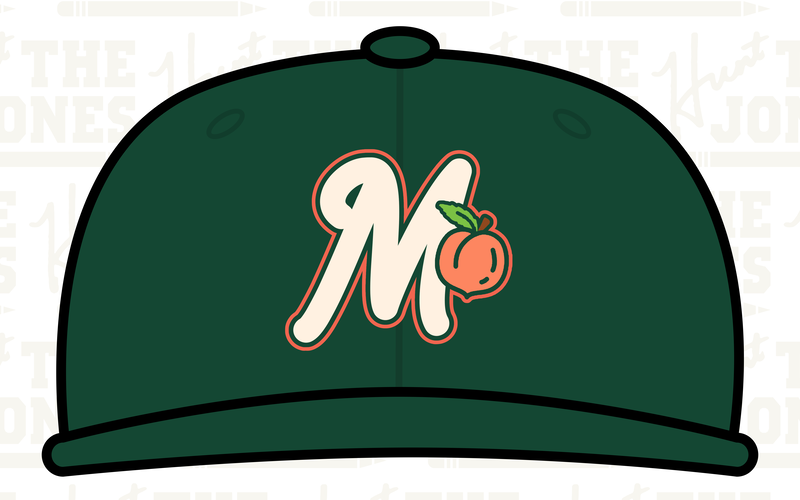 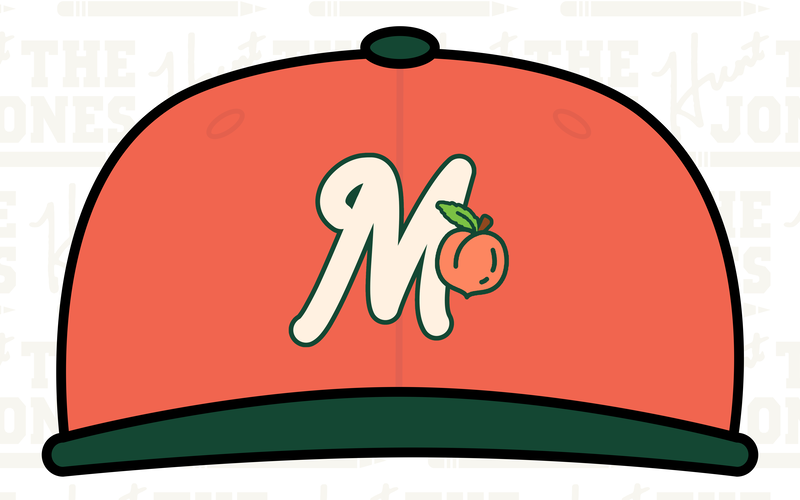 So, there you have the Macon Peaches.  With a good uniforms selection and branding that captures all of the Peach State, I believed that the Macon Peaches had the chance to outgrow just the Middle Georgia & Lake Country audience, and in my concept they would do just that.

The move north to the big city was an easy one.  The Peaches had taken Georgia (and the Southeast) by storm.  They would join the National League, bringing their branding with them to become Atlanta's Major League ball club (remember, the Braves never come to Atlanta because of the Peaches).  With an already beloved brand, the transition aesthetically is seamless (ha).  Keeping with the Peaches script, the only real transition comes with changing "Macon" to "Atlanta" for the road jerseys. 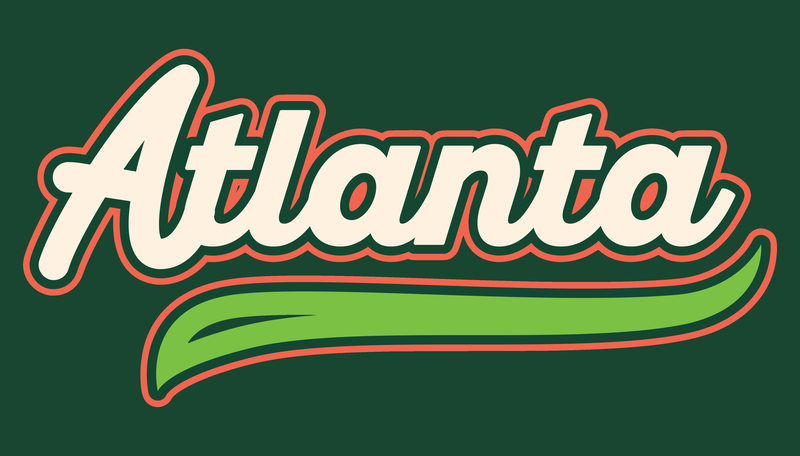 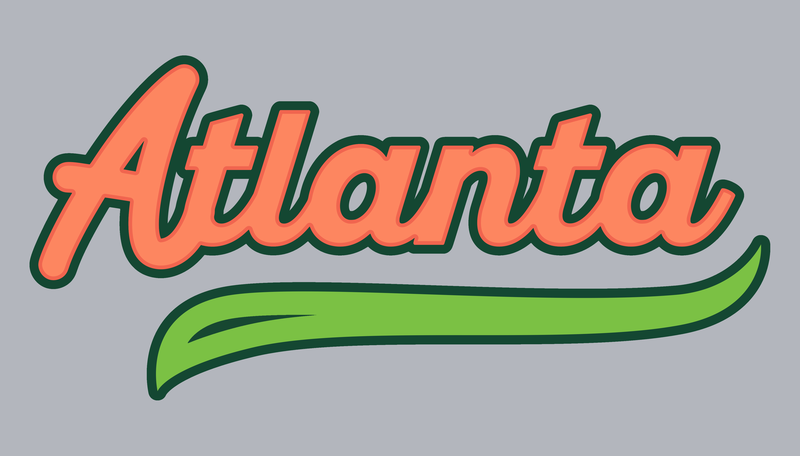 "Atlanta" Script for the Grey Road Jersey.
Being in the spotlight and national audience also provided an opportunity to create alternate looks, giving the "Peaches" script another opportunity to shine, this time on a Peach background as an alternate mark. 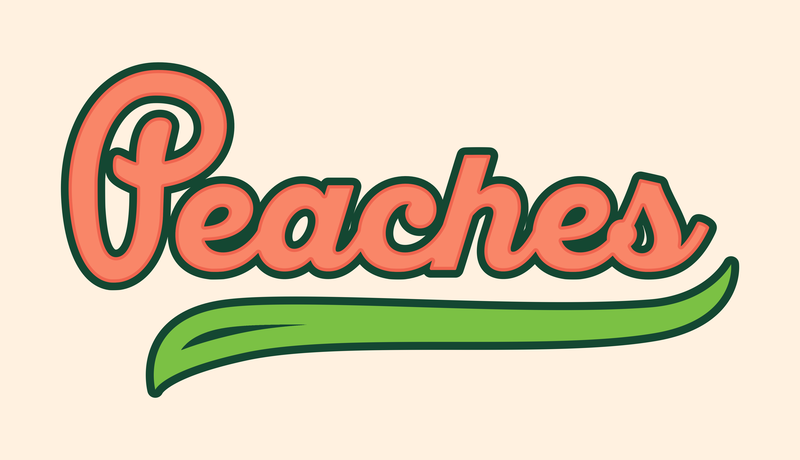 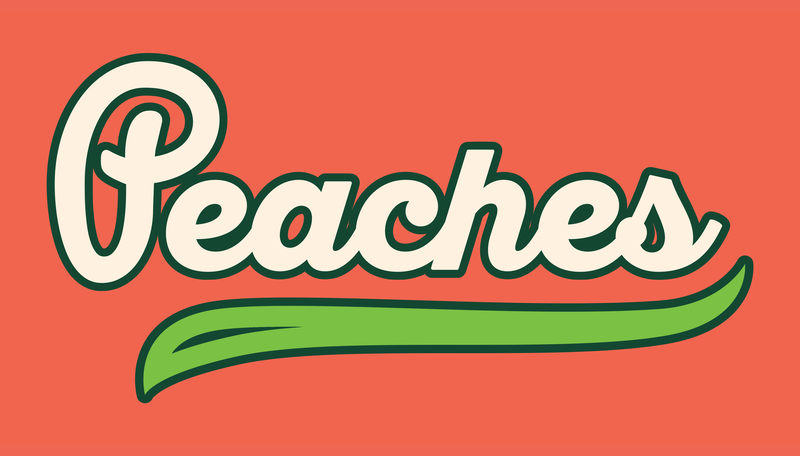 "Peaches" Script to appear on the new Peach colored Alternate Home Jersey.
As the Peaches grew in popularity, so did the want for a Sunday alternate uniform.  As the Peaches already wore cream uniforms for every home game except Friday nights, the fauxback "Old Georgia Peaches" White and Silver-Grey Pinstripe uniforms were introduced, quickly becoming the most popular of all based on jersey sales.  It also includes a "The Peach State" patch on the left sleeve.

"The Peach State" patch to appear on the left sleeve of the "Old Georgia Peaches" Fauxback Jersey.
The biggest change for the Peaches came with the need to replace their hat logos, as the Macon "M" could no longer be sufficient for Atlanta.  A similar version was adopted with the creation of a new Peaches script "A" and Peach logo.

Primary Atlanta "A" Cap Logo that appears on the Home and Road hats.

Secondary Atlanta "A" Cap Logo that appears on the Alternate Peach colored hat.
Also, with the addition of the new Peach alternate jersey came the need for an alternate hat that wasn't Peach.  Honestly, I had planned on doing the Peach hat on Peach jersey, but I didn't like how it turned out, so a new batting practice hat was introduced along with the Peach alternate jersey to be worn on Friday night home games.  The Peach Logo is also featured as a patch on the left sleeve of each Peaches jersey.

The Atlanta Peaches "Old Georgia Peaches" Fauxback Hat.
The team uniforms stayed traditional and kept all of their same charm with the move as well, molding the Peaches into one of the most nationally recognized brands in all of Major League Baseball. 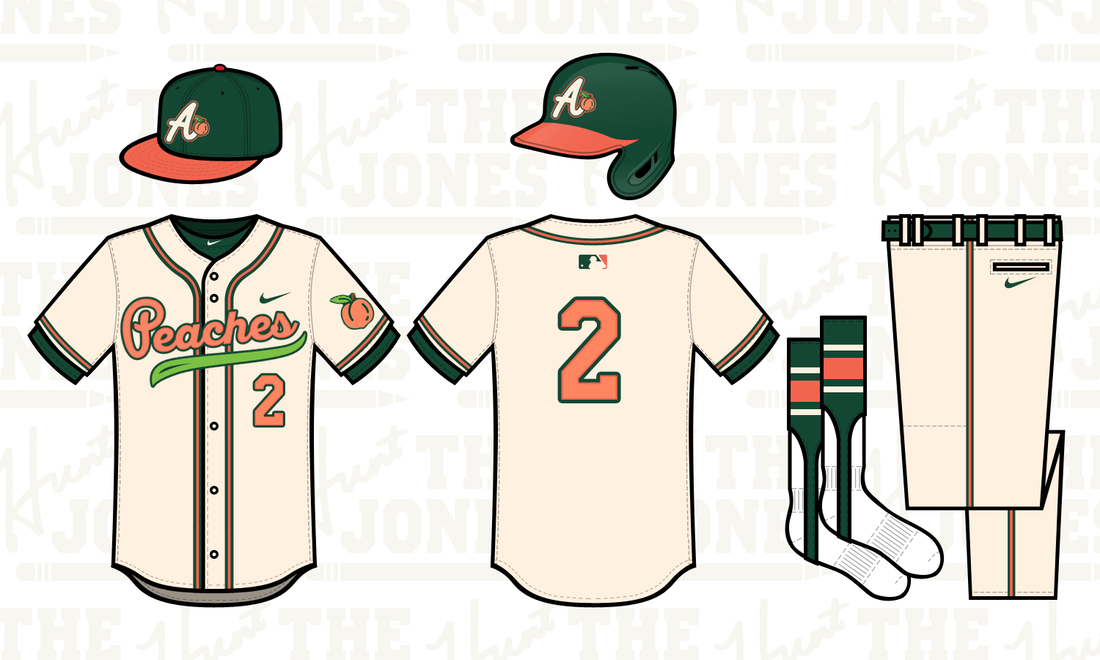 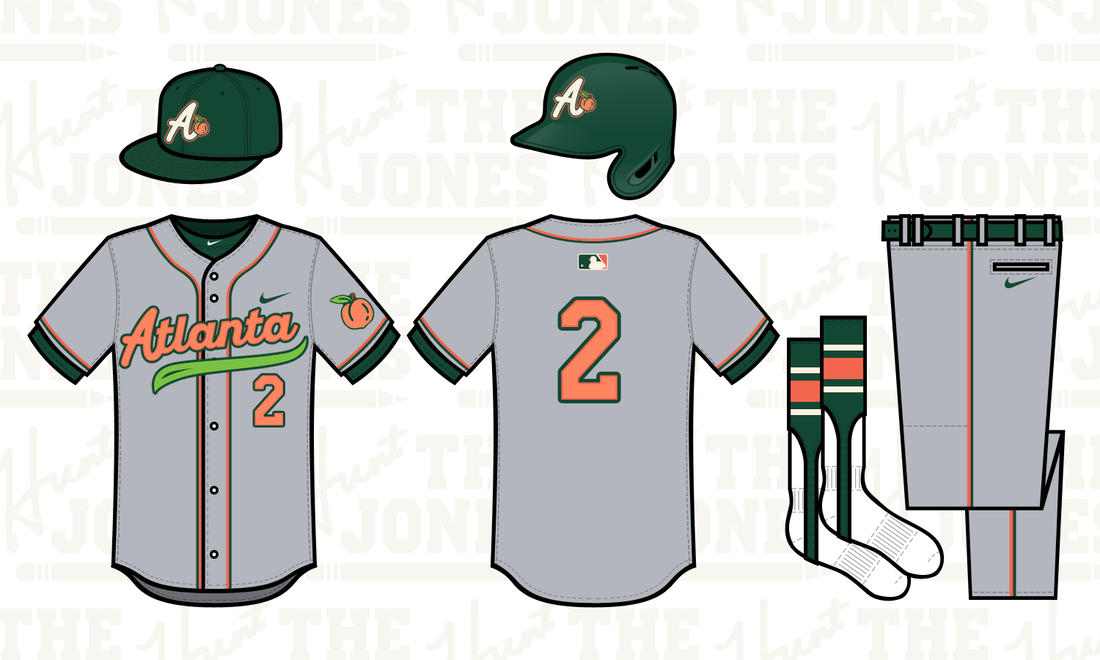 Atlanta Peaches Road Grey Uniform
Worn as the primary uniform on the road. 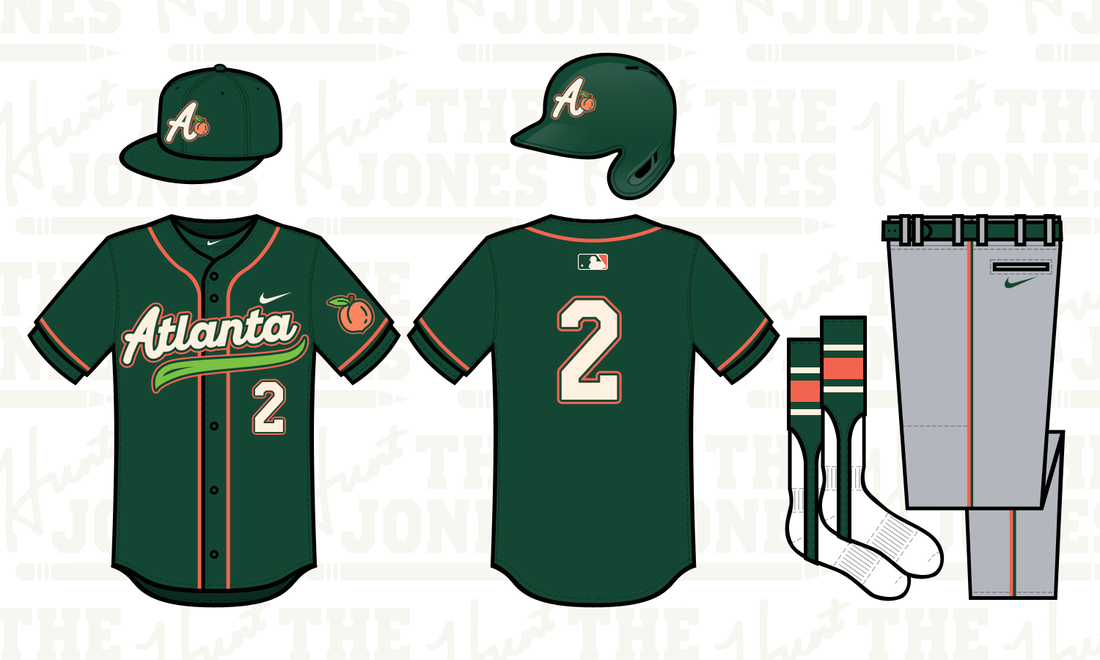 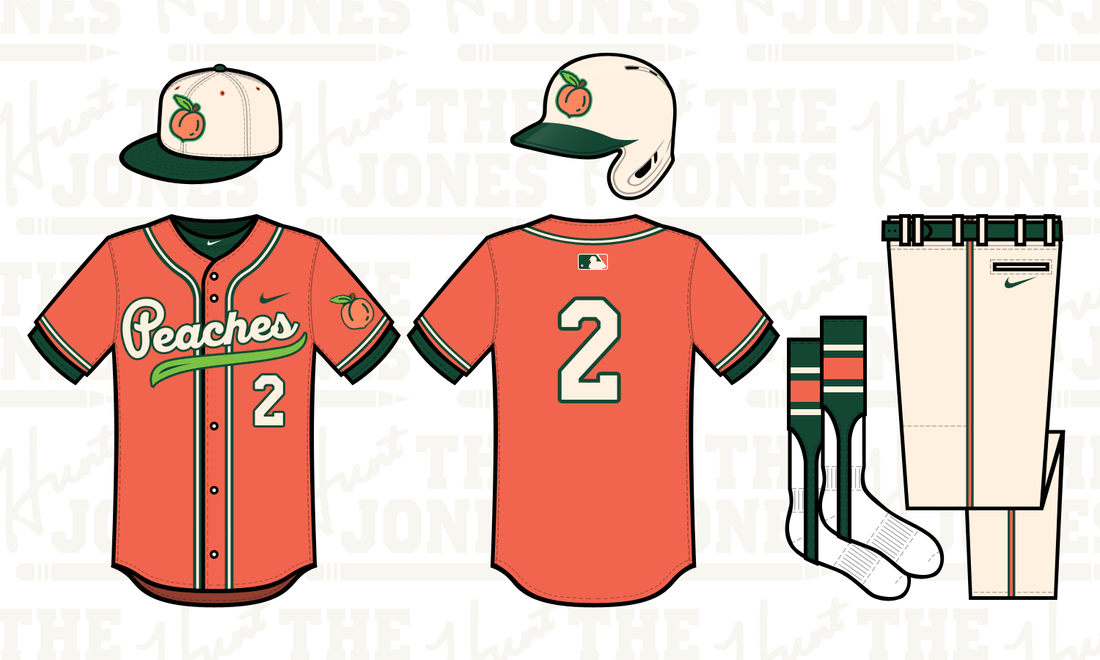 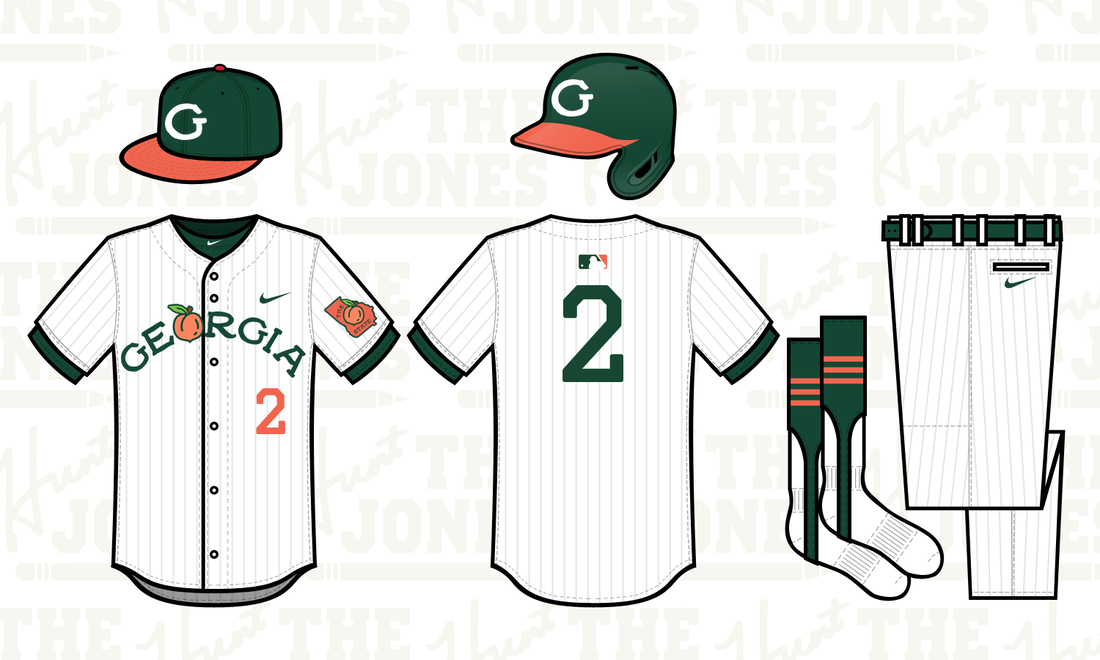 ATLANTA PEACHES​, Part IV. - A Move to the Metro.

After their rapid rise to success (a rise that included 14 consecutive division titles and a World Series Title in 1995) in Atlanta-Fulton County Stadium from 1966-1996 and a stint at Turner Field from 1997-2016, the Atlanta Peaches set out for the suburbs, building and settling in to their new home in Cobb County, SunTrust Park, in 2017.

With a new GM and a core of young and exciting players, anchored by consistent veterans, the Peaches look to be set up to make a run at another division and post-season dynasty in the future. 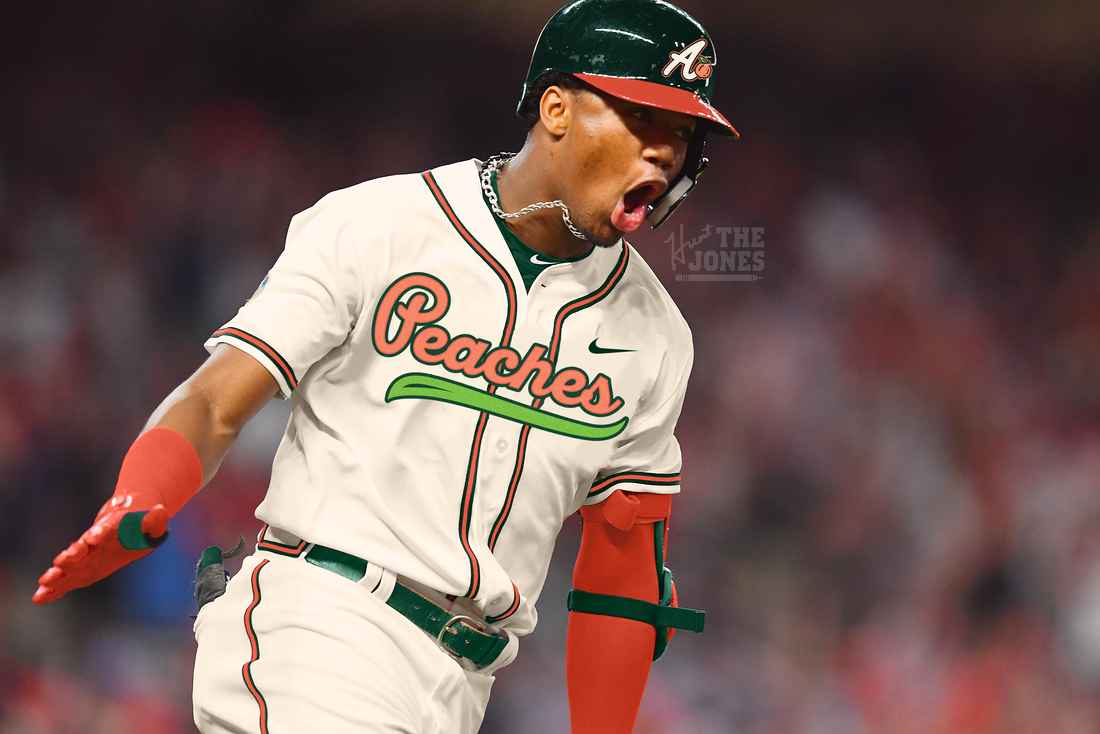 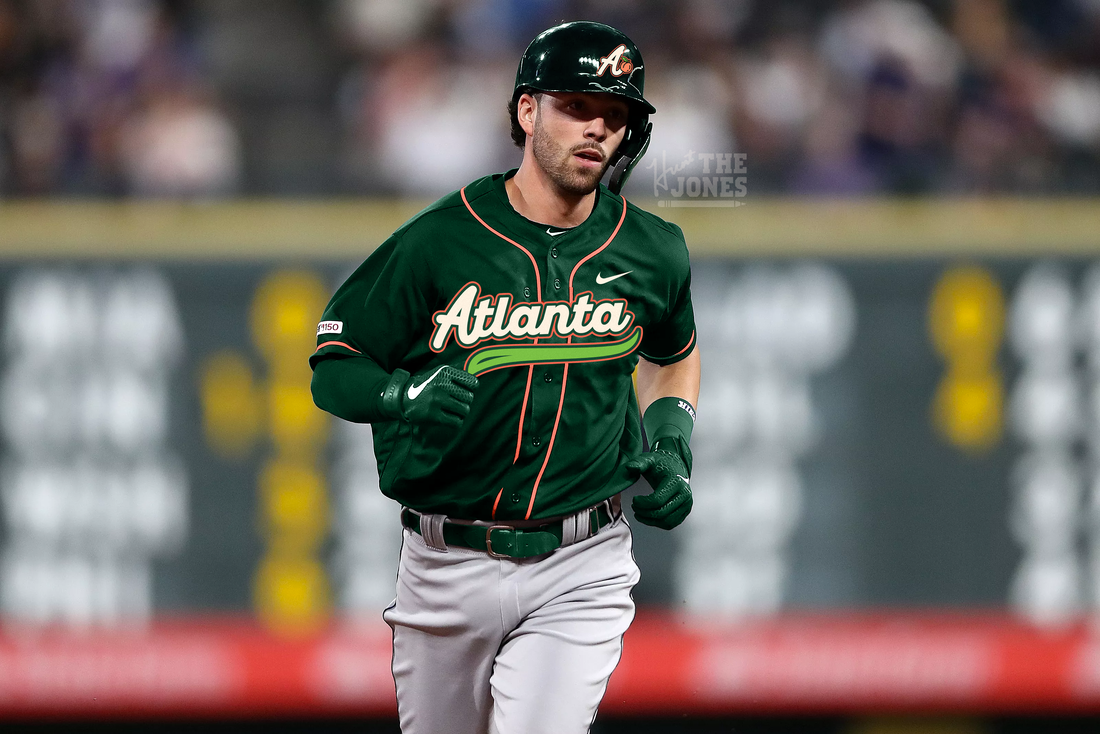 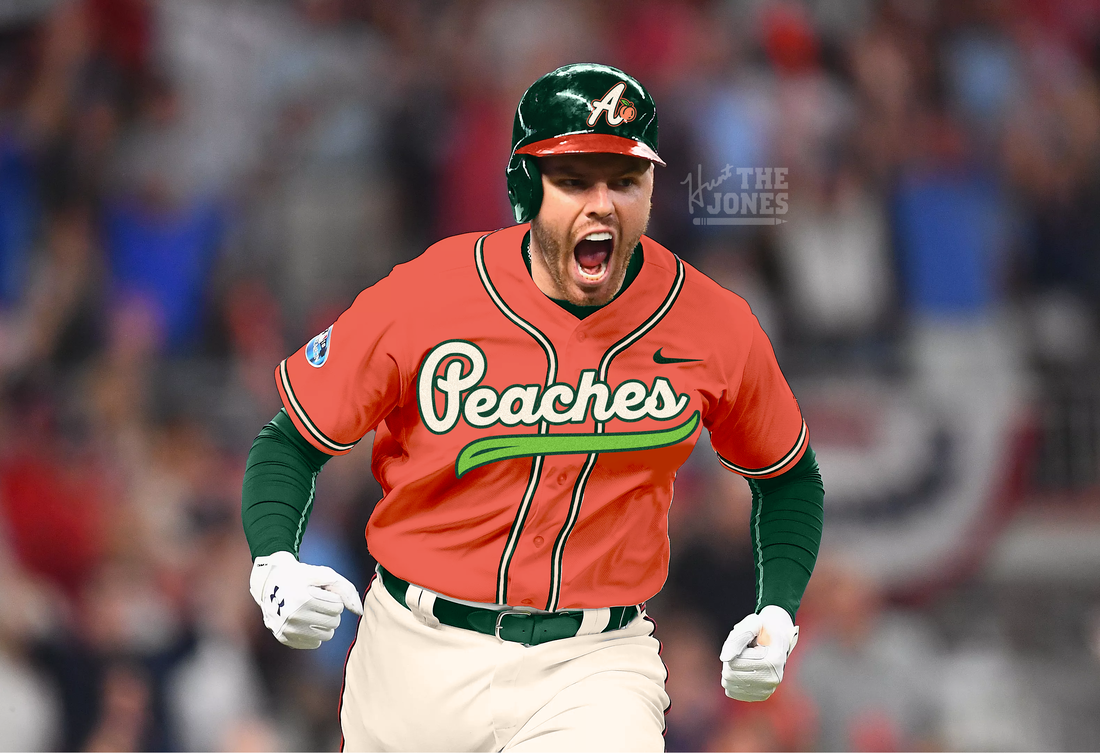 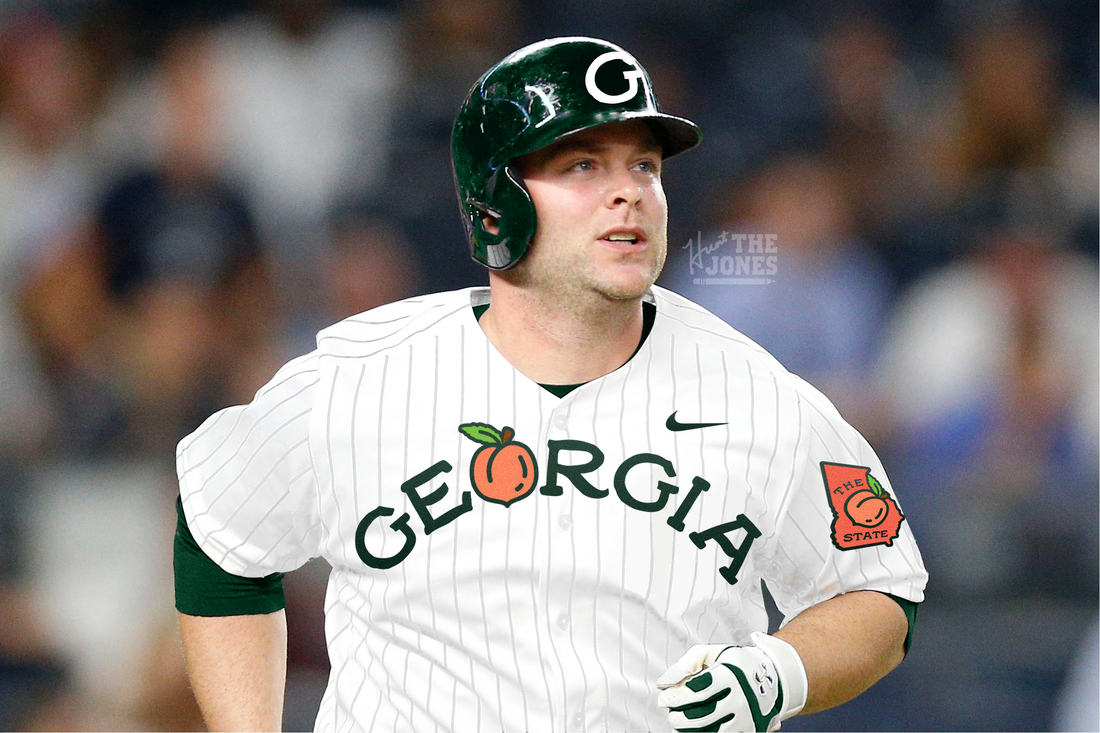 This is a fictional concept by Hunter Jones.